I really wish you would leave a comment when you visit.
I know you stop by.
I'd like to say Hi

This picture doesn't do justice to the the actual taste of this red/orange sauce, which tends to grow on you. 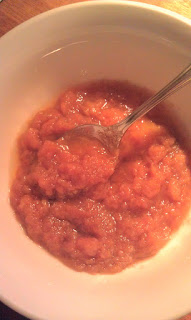 I used some of our hundreds of fallen, bruised, wormy apples, added some nice crab apples from the Farmer's Market and threw in two peaches to make a strange but yummy sauce. Two peaches for the amount of apples I used was too much, and tasted a bit chewy. I will leave out the peaches with the next batch. I could add some raspberries...I wonder how that would taste, I'll make just a small batch.
I peeled, cored, cut out the bruises, and worm holes, cut them into chunks and into the crock pot they went along with the crab apples and the peaches. I set the crock on low and left them to cook overnight. There is no added sugar or liquid, yet it is very sweet. After the first couple of tastes, it grows on you...it will be better without added fruit1
Posted by Unknown at 10:04 PM No comments:

Can someone please tell me why certain people think they have the right to interfere in other peoples lives??? The daughter of a friend of mine just recently had the back window of her car smashed with a piece of concrete. Three boys, 13 to 17 decided it would be fun to cause some damage. They probably got a real rush from the sound of breaking glass, not for a second realizing that they were causing even greater damage to the lives of the owners of those cars. Time, money, disruption of their daily routine, the fear that it may happen again. I actually can see what would make a person Want to throw a piece of concrete through a car window…I think that would probably be pretty cool. BUT…there is a difference between wanting to throw that concrete and actually deciding to throw that concrete. I can think of all sorts of things that would be fun, or exciting or very, very interesting to do, but I understand the difference between right and wrong, and I just wouldn’t, couldn’t follow through. Another friend has had their home broken into at least four times, it may even be more. They have a security system, they have dogs, they leave lights on, lock their doors and windows, they do everything right, yet they are still vandalized. Someone knows them, knows how they live, what cars they drive, the tricks they use to stay safe, but they are not safe, because yet again, Someone thinks they deserve what is not theirs. My car was rear ended by a young driver, talking on his cell phone, driving without insurance. Now I am $500.00 poorer because he broke the law and drove without insurance. I suppose I could have decided against getting it fixed, the damage was minimal and if it had been my old car, I would have ignored it, but it was a brand new car, so I coughed up the money. I haven’t investigated to see what, if anything, happened to him, if he got a ticket, or lost his license. I’m hoping he lost his license, otherwise what is the incentive to have insurance?? Why should I pay my monthly premiums isfnothing is going to happen to me when I decide to drive carelessly?! Lastly…email hackers! This is at least the fourth time I have been hacked. What gives people the right to think this is Okay???? It’s not okay. It’s disruptive, it’s harmful, it’s annoying and it makes me MAD! My sister calls and leaves menasty messages whenever she stupidly opens up an email that looks like it came from me. I’ve told her numerous times that I do not send emails and IF I need to, I will make sure the comment is obvious that it is from me. I’ve learned that lesson, and I don’t open anything that seems the least bit hinky. So, I am very sorry to anyone who was the unfortunate receiver of my latest hack. I have changed my passwords once again.
Posted by Unknown at 9:07 PM No comments: